An Introduction to Haskaps & Honeyberries

It is very difficult to determine the exact native footprint or region of the Haskaps, as we have only recently started to look. The map below shows that it is fairly widespread across the Northern hemisphere, divided into two camps Lonicera caerulea (Western Europe, Siberia and Northern Asia) and Lonicera villosa (North America). However, we do know that the best tasting varieties come from Western Siberia to Northern Japan from the following varieties –

Honeyberries & Haskap Plants have long been harvested in the wild in western Russia, northern China and northern Japan. Where it has been treasured and used in folk medicine for centuries. This blue member of the honeysuckle family (Lonicera) was not officially documented until 1755,  in ‘Description of the Land of Kamchatka’ by Russian explorer Stepan Krasheninnikov’s.

Lush berry shrubs, such as honeysuckle, bilberries and cranberries, dominate the tundra landscape. The Kamchatka honeysuckle and mountain ash decorate the foothills and valleys. Honeysuckle is a shrub, which lives 50 to 70 years. Its berries are large and have a delicious taste.

Agricultural research to develop this berry into a commercial crop began in the former Soviet Union in the 1950s with selections primarily from Lonicera caerulea,  kamtschatica, edulis, altaica and boczkarnikowae. In the 1970s, a research programme was started in Hokkaido, Japan, to develop selections from their local subspecies, Lonicera emphyllocalyx.

Why has it remained – ‘World’s tastiest secret?’

There are some 18th and 19th-century references to an “edible, early-ripening wild berry resembling a blueberry in Russian and Japanese texts. The historically closed societies of both these nations made publication of any information concerning this edible blue honeyberry extremely difficult. Perhaps we could argue one of the best side benefits of glasnost, which marked the collapse of the Soviet Empire in 1986, was the introduction of the Russian-bred honeyberry to the world. 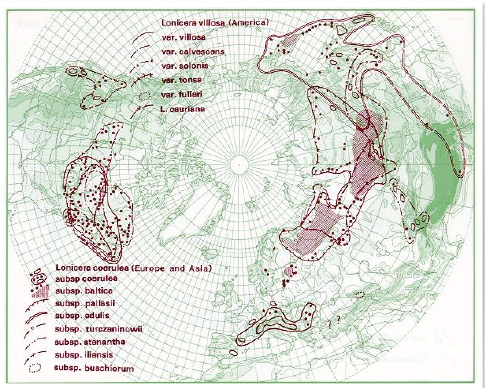 Where will it thrive? In more places than you think

The native distribution of the Honeyberry & Haskap Plants are widely spread over many different climatic or regional zones from the Russian arctic to more moderate coastal ones of Northern Japan.

However, the plants are also becoming well know for its adaptability to new local growing conditions outside its native homelands, especially if the soils meet its requirements. It was once thought that it would only thrive  the cold middle Canadian hinterland. Where it is easy to make climatic comparisons to Western Siberia.

The Honeyberry opportunity is starting to attract commercial growers attentions in the traditional berry regions of the United States. We believe it will not be long until curious and optimistic growers set up new orchards within the Haskap Plants ‘Goldilocks Zones’ below.

Sophia Łukaszewska together with her husband Jerome started their wonderful  adventure with Honeyberries or  “Jagada Kamczacką” in 1991. In their garden in Osielsko near Bydgoszcz, they planted the seedlings imported from Russia varieties of Honeyberries. Even after the first year, they managed to select two promising varieties with tasty fruit. This was one of the main features that were taken into account during the selection process.  Over 90% of the plants from the Russian seeds produced bitter fruits.They continued their work with other varieties derived from Lonicera edulis Turcz. Two of which were named ‘Wojtek’ and ‘Jolanta’ and were submitted to the Research Centre for Cultivar Testing in Słupia United, where they were described as a model for other new Polish varieties of honeyberries.

Since receiving funding from Saskatchewan Agriculture in 2006, The University of Saskatchewan, under Dr. Bob Bors direction have made controlled crosses, between Japanese, Russian and Kuril parentage, resulting in thousands of Haskap Plants seedlings. This research program has seen impressive results in faster-growing plants and larger and more flavorsome berries. Their goal is to combine the best traits from different regions to adapt this crop for mechanical harvesting under the varietal name – Haskap and are better adapted to warmer areas.

Their new Haskaps (Boreal Beauty and Boreal Blizzard) continue to improve since the introduction of Borealis (2007) with the introduction of higher parental breeding quality. Most of their advanced breeding material is based on hybridizing germplasm from Maxine Thompson (Formally Oregon State University) from material sourced in Japan, Russia and Europe, Jim Gilbert (Northwood’s Nursery) and Maria Plekhanova (Vavilov Institute, Russia).

Dr. Bob Bors is the Head of the Domestic Fruit Program and an Assistant Professor in the Department of the Plant Sciences University of Saskatchewan, and lead’s Canada’s development of Haskap berries. He began in 1999 to head the Fruit Program at the university. Bob obtained a BSC from the University of Maryland, and a Ph.D. from the University of Guelph. Bob’s research focuses on breeding, tissue culture, propagation, disease screening, and interspecific hybridization of horticultural crops with emphasis on fruit and ornamentals.

Dr. Bors will share his research experience growing and breeding cold-tolerant fruit, as well as techniques for selecting which fruits to grow in the north.

Dr. Maxine Thompson, professor emeritus of the department of horticulture at Oregon State University, is one of the foremost expert on Haskap Plants in the United States. She operates an active breeding program in the United States to develop varieties suitable for the western American climate. She received a BSC and Ph.D. from the University of California, Davis. Her research focuses on the development of cultivars suited for home garden and commercial farm use. Her peers recognized her with the Frank M. Meyer Medal for Plant Genetic Resources – 1997 and the Wilder Medal – American Pomological Society – 2002.
Her varieties originate from northern Japan and tend to ripen in some cases 3 to 4 weeks later than the Russian varieties. However, this depends on the climatic region where the plants are grown. She has worked extensively with and developed numerous cultivars from this species focusing her efforts on improving the best Japanese traits including later blooming, larger rounder or more oval fruits with uniform ripening, and better more upright growth habits. Because of their strong Japanese heritage we refer to her varieties as Haskap rather than Honeyberries.